The entrance pitch lands on a boulder slope which is the floor of a large chamber with flowing water at the bottom. Passage leads off in both upstream and downstream directions.

Downstream the passage is consitentlly approx. 12m wide, with water covering most of that width. Follow the righthand wall for 150m to a section of minor rapids, with low roof ahead. Crossing to the lefthand wall,a low crawl for a few meters leads to more standing pasage. Crossing back to the righthand wall, further progress can be made by traversing on ledges at, just above, or just under the water level. 100m beyond the rapids, the passage sumps.

Upstream of the entrance pitch is a maze of car to house sized boulders. Heading southeast brings you to a large flowstone formation against the south wall. Continuing along the wall in the easterly direction, there is an undercut that was not investigated. From the formation looking to the northeast, there is an 8m? wide white stal tower--a good landmark. Following the upper section of the south wall to the northeast intersects a channel of clean-washed smaller boulders. A climb down to the left regains the stream and an inlet which was not traced through the ruckle. The main stream may be followed to the point where it flows out of a half-meter by 20 cm hole in a wall.

Back at the pitch, climbing north up the slope of the boulder pile and following the north wall to the east gives relatively easy progress (follow the footprints) along the Geomagentic Highway. After 200m the sound of running water should bring you to a large slab. Head down and to the right on the slab to meet a large cascade of gour pools and the source of the water. Crossing the muddy gours to the left and heading up the slope brings you to the crest of a boulder pile. Ahead the ruckle descends to a muddy sump pool, where the water briefly rises before sinking between boulders, only to reappear at the gours.

The sump pool may be circumnavigated at a high level. Traversing to the left over muddy boulders brings you to a flowstone coated inlet, where the water disappears though an aqueous squeeze, while dry passage Here Be Bats above the inlet was not pushed due to an overwhelming smell of guano. Continuing the traverse over sandy mud banks, the wall curves around to a second flowstone inlet and then back to the boulder pile above the gours.

Xu, Guocai: Stone forest, first wonder in the world and beautiful scenery infatuated. In: Karst landscape and cave tourism.
Edited by Linhua Song; Huaiyuan Ting, China environmental science press, 249p., 188-191, 1993.
The Lunan Stone Forest in Yunnan Province is the most famous karstic scene in the world. In an area of 912km2; with vast distribution of carbonate rocks, developed several dozens of karst features where the Major, Minor and Naigu Stone Forests are the most magnificent. The stone columns with great variety of shapes, are usually 20-40m high, some may reach 50m. The stone parths wind up and down and up to top. In these big and small stone forests, there are over 80 scenic spots and some other scenery in stone forest area will be developed. Many karst caves have been discovered including Zhiyun cave, Jibailongdong cave, Dieyun cave and Shimalonggong (Shima dragon palace) etc. All of them are magnificent and beautiful. Great types of chemical deposits are small but exquisite, some colourful, some snowwhite.
Source : IGU KC 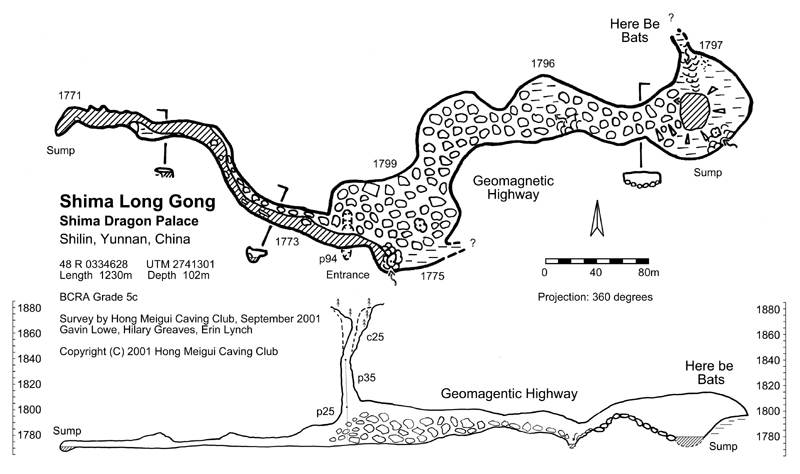