The entrance is in a 2m wide canyon obscured by foliage which starts from nothing and carves into the hillside. It is located to the right on the path from Qikeng to Da Keng.

There are three small entrances the east side of a 4m deep gully. The southern-most leads to a small chamber where over 60 cave crickets were counted. The chamber is mostly full of boulder and mud infill from the gully. From the chamber a bedding where bats roost heads north, with a visual connection to a the chamber immediately inside the two northern entrances.

From the chamber inside the northern entrance a 5m handline climb down into a 1m-wide rift which continues for about 60m past minor obstacles: a short climb which gains a rising (static in dry weather), followed by a climb down past a rat nest to a pungent puddle. A 3m climb into a high level continuation has not been pushed, but the way on is a duck under flowstone into the bottom of a decorated aven. A sloping climb down over old flowstone leads to a junction.

At the junction, updip has been followed for a short distance [QM C] but downstream continues in similar vein for about 30m to where the passage narrows to a keyhole for 5m and then gradually enlarges until a 3m climb down which gains a 10m wide chamber. Two inlets enter in the chamber, one comes from the top of a in impenetrable boulder choke, but the other flows along a rift to the side of the boulder ruckle and may be passable. The chamber is notable for its sediment bank walls and large sediment column. It appears that it was once much larger, but was filled with sediment which the current stream is now erroding.

Downstream from the chamber the passage returns to 2-1m wide rift. Cairns were seen throughout the cave and beyond the survey limit. Presumably they were left by Dmitry.

From here on the passage becomes a little tortuous. An awkward corner is followed by a narrow slot (squeeze) into a 2m wide pool chamber. A short crawl pops out at a 1.5m drop into a smaller pool chamber. Chockstones in the roof were used to secure a ladder for the next 7m Centipede pitch which is located at the end of a bodysized tube 4m long. This section could be unpleasant in non-dry conditions.

Below the 7m pitch the passage becomes even more tortuous with another technical squeeze before reaching another awkward pitch head, Amiguito. This pitch may be passed with a 10m handline. It lands in a 4m wide chamber with another 5m pitch following immediately, ladder needed which can be rigged from a distant natural and backed up to the previous handline.

The next chamber reached is slightly smaller and is again followed immediately by an awkward slot onto Vainglorious pitch, which is just big enough for a caver and the water. A drop of 4m lands into a bigger passage which shows a significant change in character. A dry inlet joins from ahead and the passage steps to the right down an easy free climb to the head of a bigger pitch with space ahead [QM A]. 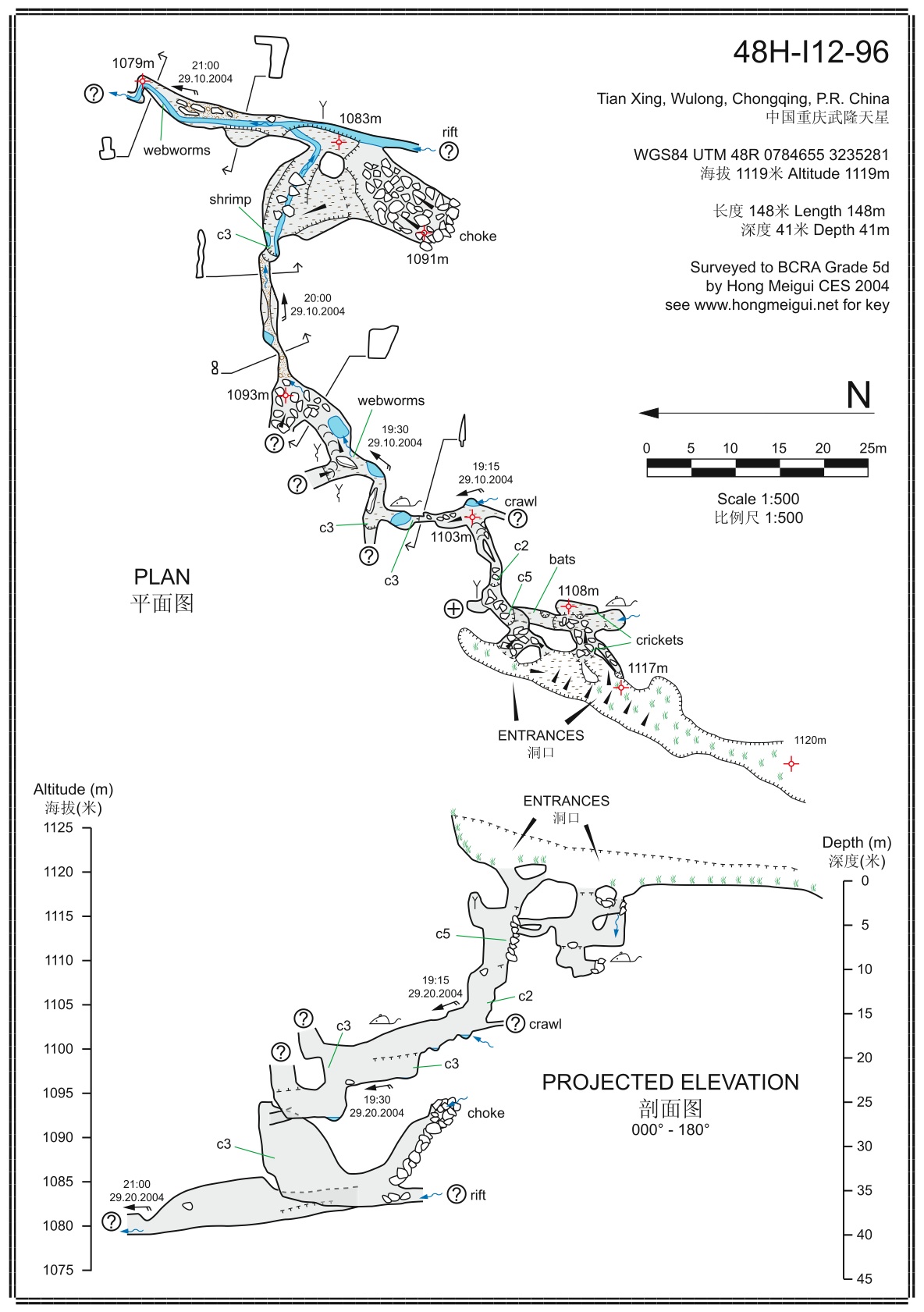